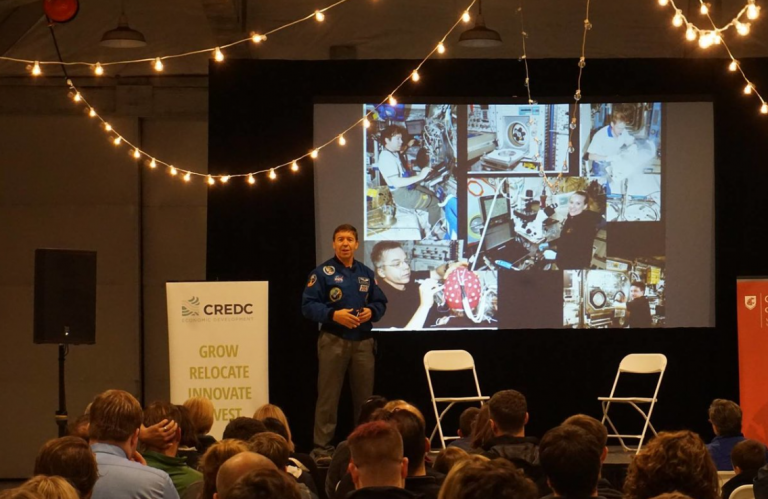 Astronaut Michael Barratt has some advice for students wondering if those math, science and English classes are really worth it: You never know what you’re going to need.

Barratt, who has five kids and grew up in Clark County, said he’s heard the oft-repeated school kid complaint “I’m never going to use this” about un-liked subject matter more times than he’d care to count. But as a medical doctor who had to learn the technical skills required to work at NASA, he said he’s been constantly surprised by how often those once-unloved skills come in handy.

“I’m a life sciences dweeb, but I use math all the time,” Barratt said. “I write all the time, too. If you can’t write and communicate, they won’t glom onto your ideas. We need all those skill sets.”

“Life sciences (Barratt’s area of expertise) is one of our target sectors for economic growth,” said Mike Bomar, president of CREDC. “Part of that is we want to make sure kids growing up in the system here can see successful industry professionals. I think the idea of a NASA astronaut as the ultimate career shows it can be done here, and that our students should follow their dreams.”

Barratt graduated from Camas High School in 1977, and his parents still live in the city. He got his zoology degree from the University of Washington in 1981 and his M.D. from Northwestern in 1985.

The human body can do things weightless that it can’t do on the ground, which is something Barratt has spent a considerable amount of time studying over his career. Diseases also behave differently in space, as does the human central nervous system. And it’s also a great environment to study osteoporosis, which is amplified in zero gravity.

“(Going into space is) like switching osteoporosis on and off,” Barratt said. “You can test drugs and get results fast because of that.”

Going into NASA Barratt had a strong background in biology and he also knew how to speak Russian. But he found he had a lot more learning to do once he joined the agency.

“When you first show up for work as an astronaut, they say ‘we’re very appreciative of your skills, now you’re going to school again,’” Barratt said. “I had a lot of engineering to learn during basic astronaut training, but I had my own advantages. I knew Russian and zoology. So, after my fellow astronauts got to watch me struggle with engineering, I got to watch them struggle learning Russian.”

Having scientists and astronauts learn each others’ skills is actually a huge benefit – it helps foster new ideas and crossover technologies, along with being absolutely necessary in conditions where overlapping skill sets could save your life, he said.

“We all had our areas of discomfort as we had to learn each other’s worlds,” Barratt said. “But I think that’s a good thing. One thing that’s common in the space world is diversity of interest. It puts together everything I love.”

There’s also a lot of scientific research that can only happen in zero gravity, he said.

For instance, pharmaceutical companies can help fast-track medications by using the environment to grow larger, more perfect protein crystals than can be grown on Earth. The companies analyze the crystal growth and use the data to help them create better computer models of how carbohydrates, nucleic acids and proteins work.

“You can grow really big ones that make them really easy to analyze,” Barratt said.

Disease outbreaks in space are also a concern. NASA quarantines astronauts for about two weeks before they fly.

“I was up there once when (the quarantine) didn’t work, and we had a cold spread,” Barratt said. “In zero G there’s no place to drain your sinuses, so your head feels like it’s going to explode.”

Space environments turn into their own small ecosystems, with whatever lives in the air, water, and on or in the crew becomes its own microbiome. That’s something Barratt also wants to study more, because it will impact future space exploration and outposts.

“It’s something we just started to study,” Barratt said. “We’re also starting to adopt genetic techniques, proteomics, all the -omics sciences in looking at that.”

Barratt gets back to Camas a few times a year to visit his parents, he said. He was unfamiliar with Vancouver’s $1.5 billion Waterfront Development Project when he arrived, but said he’s excited to see it come together.

“It sounds awesome to me because I grew up there,” Barratt said. “I’m an entrepreneur, and I like things like that.”

He said Washington’s quality of life and its plethora of high tech companies bodes well for the state and for Clark County to grow a successful life sciences economy.

“To have that in the backyard of where I grew up, that’s awesome,” he said.