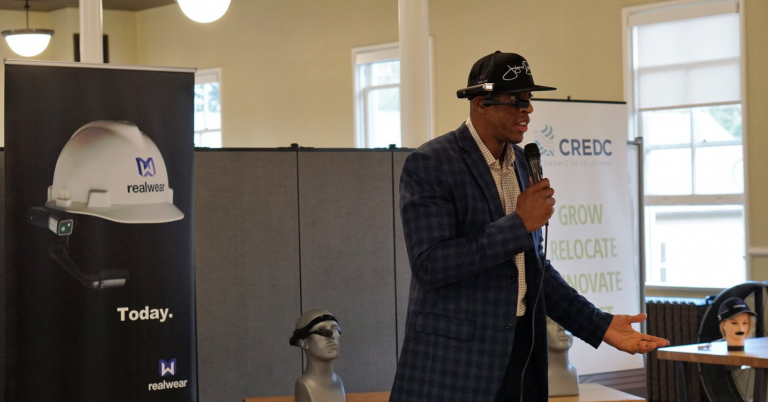 The thing about making new products is that people often invent their own uses. For hardware company RealWear, a new partnership could be a legitimate crossover.

The Vancouver-based hardware company is in talks to supply its head-mounted tablet computer, the HMT-1, to the National Basketball Retired Players Association for its efforts to introduce basketball to children in rural or developing areas overseas.

Jerome “Junkyard Dog” Williams, who spent nine seasons in the National Basketball Association, joined RealWear’s advisory board in February. He is also president of the NBRPA’s Las Vegas chapter. On Thursday, he spoke at the GROW Clark County networking event about how the two organizations sync.

“RealWear needs a platform to unleash this tech,” he said. “Basketball players and alumni love to train kids. It probably happens every day.”

RealWear’s HMT-1 has so far mainly been pitched to augment heavy industries. It provides a hands-free, voice-controlled computer and camera that could, for example, show instruction manuals to workers in the field or link them with co-workers back at headquarters.

Williams floated a different idea: Use it to teach basketball fundamentals more effectively. The NBRPA regularly sends ambassadors to China, Williams said, but trips are spaced months apart and lessons are soon forgotten. Like doctors in telemedicine, coaches may be able to coach without being there.

The partnership is not official, but Williams said their goals “align.”

“It’s all about training the next generation of basketball players,” he said. After touting the device’s abilities and access to third-party applications that could translate languages on the fly, he added “This device needs to be in the hands of every NBA, NFL, MLB, NHL player across the globe. Soccer. You can take this and give it to a parent and tell them what to do.”

While that is not an industrial use in a typical sense, chief revenue officer Brian Hamilton said they are exploring how adaptive its technology is. He said the device benefits certain uses that span several industries, from auto mechanics to surgeons.

“We’re an industrial company, this is another industrial use case,” he said.

Questions were posed about whether users would experience motion sickness during, say, a basketball game. CEO and founder Andy Lowery said that is a problem that can be solved with software adjustments to make the video flow easier.